Swordplay and Shakespeare: Who Could Ask For Anything More?

I recently had the pleasure of attending the book launch for Shakespeare’s Rebel and am wondering if all book launches are this much fun. I had never been to one before so when the opportunity arose I took it.

The event was co-hosted by the author C.C. Humphreys and Academie Duello in the main tent at Bard on the Beach in Vancouver which meant that this wasn’t your average ‘author standing in front of a group of people reading excerpts from their book’ book launch. Not to say that wouldn’t have been enough. Humphreys is thoroughly engaging when he reads and at one point had the audience so enthralled that we were all willing to shout “bollocks to the bard!” at his request.

The addition of a historic swordplay group to the evening meant that I could indulge in my other passion with equal fervour. Devon Boorman, the director of Academie Duello, gave a lecture about the role of the Globe theatre and the prize fights of the London Master of Defense in Shakespeare’s day while members of the group demonstrated the use of various weapons of the time. The lecture ended with a modern prize fight (i.e. not choreographed) for two of the Duello members. This was probably my favourite part as I had a front row seat and could indulge in  a little amateur analysis of their techniques.

Another highlight of the evening for me was the lecture given by Bard on the Beach’s own fight choreographer, Nick Harrison, in which he describes the work that goes into staging the final fight scene from Hamlet when all the stage direction given in the play is ‘the fight’. He explained how certain lines in the play give clues as to how one might stage the fight so as to not have just a couple of actors standing there poking at each other with weapons but to have a scene that engages the audience as well. As Hamlet is being performed this year we were able to witness for ourselves the result of Mr. Harrison’s work. Yay, more swordplay!

The evening ended with Bard on the Beach’s artistic director reading a passage from the book and one final fight scene in which Humphreys himself took part before we all moved outside to have our books signed by the author. What a great experience! I hope I have a chance to do something like this again.

If you would like to see some pictures of the event C.C. Humphries has posted some on his webpage here and also shared his thoughts on the evening here.

You never get a second chance to make a first impression.

I recently acquired a couple of Rawlings synthetic broadswords from Purpleheart Armoury and thought that I would share my first impression of them with you.

When the box arrived I felt like a young boy at Christmas. I had been looking forward to these swords since the moment I ordered them. I have to say that my excitement was well founded.

The swords are made up of four parts: blade, hilt, slide-on grips and pommel. The quality of the construction of each piece is quite good and nothing feels cheap in any way. 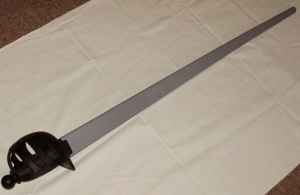 The first thing I noticed once the swords were assembled was how much they weighed. For a nylon sword it has an exceptionally good heft to it thanks to the metal rod than runs down the centre of the blade and through the handle to give the pommel something to attach to. This weight coupled with good balance and I was smiling like a Cheshire cat.

I only had a couple of minor issues with the swords at the beginning. Both of which related to the hilt.

My fist was the size of the hilt itself. I have hands that tend toward the large side to begin with and for practice I wear padded Kevlar re-inforced gloves so I need a pretty beefy hilt to get my hand into. Although not as large as I would like, the hilt is big enough to fit my gloved hand but there’s no room to spare. A slightly larger hilt would be nice. 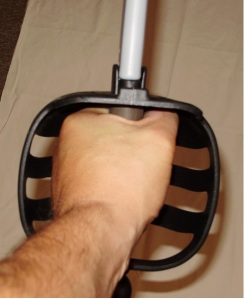 Doesn't look too small does it?

No it's not Darth Vader.

The other issue I had with the hilt were its edges. As the hilt is molded nylon the edges are a bit sharp and can be uncomfortable on bare hands when they contact. Of course this ceases to be an issue when I put on a pair of gloves.

I said they were minor issues.

Seriously I had to come up with something to critique otherwise it wouldn’t be a very good review.

These swords are great!

I spent a half an hour the other night smacking them against a wooden pell pole because none of my friends were available and by the end I was euphoric. The weight and balance of these swords make throwing cuts almost effortless. The solid ‘whump’ as the sword hit the wood made me giddy (even now writing this I’m getting giddy again). I never felt like I was going to damage the sword no matter how hard I hit the pell.

The blades seem to stand up quite well against rough handling. After my short practice you could hardly tell that it had even been used. I’ll be interested to see what they will look like in a couple of months.

Eventually I was able to get an hour of time with a friend doing some drills to see how the swords handle. My pleasure at having bought these sword was not diminished at all. There was almost no glancing with hard parries and once again the weight of the swords made me forget that I wasn’t working with my metal backsword.

I can see why Rawling’s synthetic longswords have been all the rage among the Liechtenauer/Fiore groups.

At $62 plus S&H, taxes, etc. this is an amazing practice sword. I’m going to be using mine as much as possible over the next few months to see how it will hold up to use. Even so a replacement blade is only $40.

Do you have any experience with this or any of the other swords from Rawlings? If so, leave a comment below to let me know.

Most SCA Rapier participants tend to think of George Silver as ‘that mad Englishman who had a huge hate on for long-bladed rapiers.’ Not that this description is all that inaccurate considering Silvers describes these swords as an “…imperfect weapon, which serves to kill our friends in peace, but cannot much hurt our foes in war.” After doing some research for another project, however, I have found that not only was he not alone in his opinion but that he wasn’t even the first to complain in writing about the inadequacies of long-bladed rapiers.

Published in 1590, Sir John Smythe’s Certain Discourses Military, was the first English military treatise. Discourses was an appeal to the English nobility to cease the adoption of the caliver, among other Continental ways of waging war, and to go back to the ancient, and in Smythe’s opinion infinitely better, weapon the English longbow.

… our such men of war, contrary to the ancient order and use military, do nowadays prefer and allow that armed men pikers should rather wear rapiers of a yard and a quarter long the blades or more than strong, short, arming swords… a squadron of armed men in the field, being ready to encounter with another squadron, their enemies…being in their ranks so close one to another by flanks, cannot draw their swords if the blades of them be above the length of three quarters of a yard or little more (i.e. approximately 32-34″). Besides that, swords being so long do work in a manner no effect, neither with blows nor thrusts, where the press is so great as in such actions it is. And rapier blades, being so narrow and of  so small substance, and made of a very hard temper to fight in private frays, in lighting with any blow upon armour do presently break and so become unprofitable.

This sentiment is echoed in the epistle to Paradoxes where Silver states:

…when the battles are joined, and come to the charge, there is no room for them to draw their bird-spits, and when they have them, what can they do with them? Can they pierce his corselet with the point? Can they unlace his helmet, unbuckle his armour, hew asunder their pikes with a stocata, a riversa, a dritta, a stramason, or other such tempestuous terms? No, these toys are fit for children, not for men, for stragling boys of the camp, to murder poultry, not for men of honour to try battle with their foes.

Of course, if it were only these two gentlemen deriding the rapier one could dismiss their opinions as a couple old codgers complaining about the decline of their great nation in the hands of younger men. However, they were not alone. At least not in so far as the length of weapons to be used on the battlefield.

In his treatise of 1591, which in itself was a direct rebuttal of Smythe’s Discourses, Humfrey Barwick recommends ‘…a good sword of a yarde in blade, and no hilts but crosse onely, a dagger of ten or twelve inches in the blade and the like crosse hilt.‘ Smythe too recommends a short dagger of only nine to ten inches. At least these two could agree on one thing even if they were polar opposites in regards to the longbow vs. musket debate.

Smythe and Barwick’s recommended blade length would appear to agree with Silver’s perfect length of a yard and an inch for the average person. Or rather I should say that Silver agrees with them as his Paradoxes of Defense was not published until 1599. Silver would probably have been familiar with both of these books as Smythe’s book sold very well and the back and forth between Smythe and Humfrey was akin to an Elizabethan flame war.

Still, is this just a few Englishmen tending to be a tad protectionist with their weapons? I had thought so until I came across a reference in an article by Tom Leoni entitled “The Rapier Revisited” (which by the way is an excellent read). In it he mentions that according to Bonaventura Pistofilo the ideal military sword was “…three Roman feet or just over 36 inches measured from the hilt.” So it wasn’t just Englishmen who felt that long-bladed swords had no place on the battle field.

Of course neither Barwick nor I’m sure Pistofilo ranted about rapiers in the same manner as Silver and Smythe but they were all roughly in agreement when it came to the length of blade that was serviceable in the press of men on the battlefield. In the end, however, the point I would like to make to you dear reader isn’t that the English basket-hilted sword is better than a long-bladed rapier but rather that if George Silver is a crackpot for his views on this subject at least he is no longer the lone crackpot screaming into the wind. Or am I just another pro-Silver crackpot looking for excuses? Post a comment below and let me know.